Orly Taitz Admits her Allegiance is not to the United States, while hemming and hawing about the question

I was listening to the Pete Santilli show, and reading the description, when this lept out at me: “During the interview Taitz admits she is a duel citizen and her allegiance is to the State of Israel. She states that being a duel citizen is not illegal in America and Palestinians are murdering Iraeli’s and justifies the slaughter of the Palestinian people by saying Benjamin Natanyau is not an evil man.” 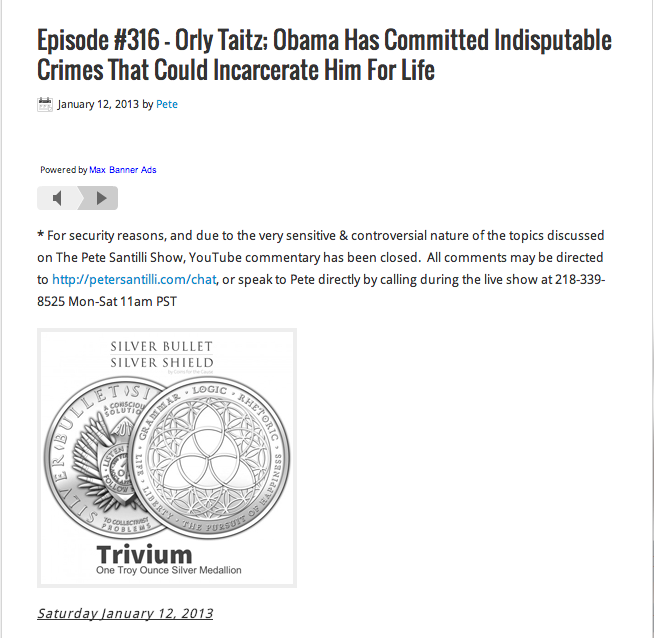 “Naturalization Oath of Allegiance to the United States of America

As you can see from the Oath, Loyalty to America has PRIMACY over any other Nation-State. The fact that she admitted to such is alarming, as it changes the nature of her “Crusade” to one that seeks to overthrow the duly elected POTUS in favor of a President that will bomb Iran.

So, Mrs. Taitz, are you an American or a paid Foreign Agent, and if you are a Foreign Agent, why have you not registered with the Government as is required by Law:
The Foreign Agents Registration Act (FARA) was enacted in 1938. FARA is a disclosure statute that requires persons acting as agents of foreign principals in a political or quasi-political capacity to make periodic public disclosure of their relationship with the foreign principal, as well as activities, receipts and disbursements in support of those activities.  Disclosure of the required information facilitates evaluation by the government and the American people of the statements and activities of such persons in light of their function as foreign agents. The FARA Registration Unit of the Counterespionage Section (CES) in the National Security Division (NSD) is responsible for the administration and enforcement of the Act.

Santilli says she should be vetted. Yet, she keeps dodging the questions I have put to her. For all her claims, this is about Israel, and going to war with Iran as Israel’s “proxy”. I love Israel, but I do not love the  shitty games some play regarding Israel. If anything, Orly is neither a “patriot” nor a lover of Israel, if she thinks that striking Iran will not have consequences within Eretz Yisroel. If she is anything, she is an agent of our Enemies.

I made Good Faith inquiries to you for an interview about YOU. what makes you tick, your time at Hebrew University, which will neither confirm nor deny you even graduated, Your political bent in Israel like, telling us about your connections to the Right of the banned KaCH party, Beitenu Yisroel, that is anti-Muslim. Or were you a member of KaCh? I’d also suggest not bothering to  attend Yom Kippurim services, since your confessions won’t be sincere. – all of which I deem relevant to Americans who want to understand you better. Your responses offered nothing but excuses, comparisons to real political dissidents who languish in prisons around the world, while you roam free under our oppressive Bill of Rights and to martyrs who have died for their cause. I must remind you, during this time of reflection, that we Jews don’t believe in Willful Martyrdom.

I’ve been following your sideshow for some time, and well, I just gotta say this: WTF? Do you even understand what a SLAPP Suit is? Do you understand what your attempts to deprive American citizens of THEIR right to Free Speech is called?Do you understand ‘RICO’? Your continual howls to boycott this show or that actor or add their names to a bogus “defamation” suit because they said things you considered “mean”, when most likely it was the truth regarding you and your crap “lawyering” . You have made the California State Bar a jesting-stock with your nonsense, and so, the time has truly come, madam, for you to release PROOF that it was you and not some well paid dupe who both took the Taft Law School Courses AND sat for the Cal Bar. And before your howler monkeys descend, I KNOW that you only had to provide your fingerprints at the time of your application to sit for the bar, and no a photo needed. I KNOW that no one from Taft ever spoke to you, I KNOW your English writing skills are worse than an amputee in a Calligraphy school. I KNOW you are incapable of writing a coherent pleading, and that alone should have disqualified your application to Taft.

The others are there for their amusement.

With the revelation that Sen. Eric Cantor (R-Va) held a one-on-one meeting with Israel’s Netanyahu and assured him

that the new Republican majority will serve as a check on the Administration and what has been, up until this point, one party rule in Washington. He made clear that the Republican majority understands the special relationship between Israel and the United States, and that the security of each nation is reliant upon the other.

Cantor later walked this back.  But the damage has been done. Those that believe the Zionists control Washington, like David Duke,  have their evidence of the “ZOG”. Indeed, he quickly picked up onto Glenn Greenwood essay and emblazoned it on his own site: Eric Cantor’s Pledge of Allegiance (to Israel over America! ) Greenwald I’m sure would not be pleased by the addition of the last phrase to his essay title (which is the only editorializing Duke brings to the essay), but the fact this has been picked up by the likes of Duke brings to the table of suspicion a bit of “proof’ that a Jew can’t be a loyal American, but instead owes loyalty first and foremost to Israel.

One-third of Americans believe that American Jews are more loyal to Israel than to the United States, according to figures presented to the Knesset on Tuesday by Anti-Defamation League director Abe Foxman. “This belief is so out of sync with everything else happening in America, with the fact that there’s so much acceptance of Jews in all phases of life – academia, commerce, media, politics,” Foxman told The Jerusalem Post.

The ADL goes on to blame Carter and others for this “shift”. There has been no shift, just as the teaparty allowed the closet bigot to be free, so has Carter allowed the closet bigot to spew his or her theories on American Jewish loyalty. Foxman goes on to “speculate” on my voice in American political discourse being quieted by fear. He does a a very small point. He is counseling in couched terms, to do exactly that and shut the hell up on Iran and other existential threats to his manhood.
and, here:

The phrase “dual loyalty,” though salient for Jews because of their history, is, according to Kelner, not appropriate to the current situation.

In fact, those American Jews who view Obama’s push toward a settlement of the conflict as progress express no fears of being accused of dual loyalty. On the contrary, they feel their interests are now aligned with the administration’s, if not with the current Israeli government.

“I admit that there is anxiety,” said Robert Wexler, the former Florida congressman who is now the president of the Center for Middle East Peace & Economic Cooperation, a Washington-based think tank. “There are some actors in the political process that make it their business to question the motives of those who seek to end the conflict. And I think that’s a misplaced effort. A continuation of the conflict does not help Israel. Fighting two wars every three years, facing an enemy that is better armed and better equipped each time, that does not help Israel.”

In my humble opinion as a mere Citizen, Cantor undid a lot of what Wexler was talking about, and deliberately so. The American Right cannot exist on a plane where a resolution to the conflict in the middle east is achieved, as it will destroy the Christian Right’s Endtimes Game.