Poor Prince Spraytan, the rabble are saying mean things to and about him. To prove it, the Court Ruffler printed out onto tag board for the World to see. 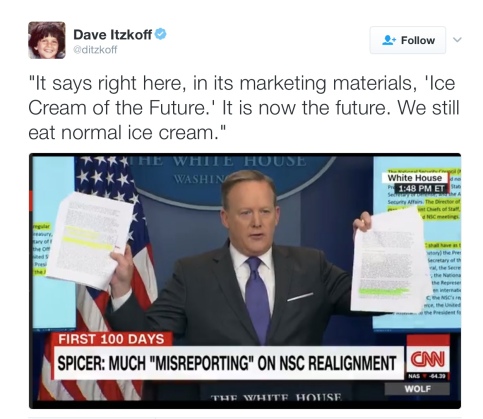 I’ve decided to update this post with the entire exchange. oldest tweet to last. I am ExitPass

grivno Ben Grivno
Did you know that it’s impossible for historic terms to take on a broader meaning? So sayeth the Blood Libel obsession crowd! #TeaParty #p2

@ExitPass Language is not a permanent fixture. the meaning of terms can broaden. the obsessive focus on a single term looks kinda crazy.

@grivno (cont) So,#Giffords accused Palin of “Blood Libel” when she criticized the “surveyor’s” symbol ovr her “surveyed” district as provacative?

@grivno nice try. As a Jew, I KNOW whaT it means, and it means “Jews murder christians and use their blood in matzoh”. THAT’S what It means

@ExitPass I was setting up a logic framework, not dissing your intelligence. I figured U knew what it meant.

END_OF_DOCUMENT_TOKEN_TO_BE_REPLACED

RT @ExurbanJon: I’m not Iranian, but “Basij” appears to be the Farsi word for “acorn”. HAHAHA!

and this is what followed:

@caraellison So glad 2 know U find the shooting of unarmed citizens by CITIZEN MILITIAS funny. probly cheered Kent State, 2. asshole@caraellison U found humor in the conflation of the murderous Basij & acorn. Shame. Doesn’t matter if U wr alive when Kent State went dn…
@caraellison ….U wld had said “good job” ovr the killings. I was alive. & ppl cheered the killings…@caraellison said the students had it coming 4 peacefully protesting Vietnam. Shame for conflating murderers with acorn.

@StephenZunderfo Dude. Context. I ACORN stole elections 2. If u think I find this funy, you hvnt been reading my tweets 4 the past 24 hrs

Still doesn’t get it, and, blocks before this:

While I don’t doubt the sincerity of this twitterer, the fact they would not explain why they found the conflation of ARMED “Citizen” Militias in the service of the State with ACORN funny, when Right Wing Extremists are murdering people at Worship and Health Care Providers in order to terrorize doctors and women into submission or are tryin gto murder people perceived to be “unAmerican” like Jews, Catholics, Unitarians,Blacks, Hispanics, Asians and anyone else not “European”(Teutonic) enough for them. These are the people that eat the offal of the likes of Hannity, Beck and Limbaugh. O’Reilly is irrelevant, and he hates that. He hates himself for being irrelevant. He hates Ailes for the buying of his soul. The others named? They gleefully sold their souls. May all their dream sbe haunted with by the victims of their hate. So, @caraellison, what elections were stolen by ACORN? Rhetorical, I know. I already know your answer.